The Affair Of The Diamond Necklace

Alexandre Dumas published his novel The Queen’s Necklace in 1849, but the story of Marie-Antoinette’s famed jewellery is still being retold to this day. The Netflix show, Lupin, which has become a cultural phenomenon in France and has been watched by 76 million people worldwide, is currently telling the same story that Dumas told 173 years ago.

And here’s why this story has had such an extraordinarily long shelf life.

The original Queen’s necklace was actually commissioned by Louis VX to give to his lover, Madame du Barry. It was to be created by the Parisian jewellers Charles Auguste Boehmer and Paul Bassenge and was to contain 647 diamonds at an incomparable 2,840 carats. Unfortunately, the King died before the necklace was completed and the jewellers were left in debt for the many diamonds that they had already acquired for the piece. 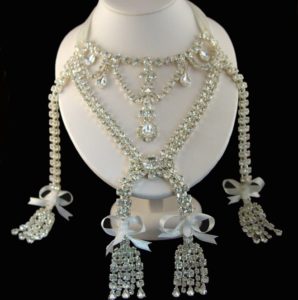 A replica of the necklace

This is where things get a little more interesting. The jewellers offered to sell the necklace to Marie Antoinette but she considered the price too extreme and hoped that the money would be better spent elsewhere. Unfortunately, the Queen had a few enemies in the closet. Jeanne de la Motte was the daughter of one of Henri II de Valois’ illegitimate sons and a distant relative of the royal family. She had tried to befriend the Queen in the past, but Marie Antoinette had kept her firmly at arm’s length and had not welcomed her to court. This had infuriated La Motte who now had a personal vendetta against the Queen. One she was more than willing to act upon. 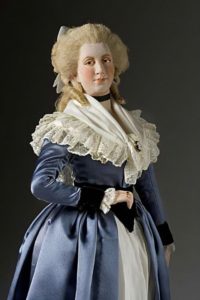 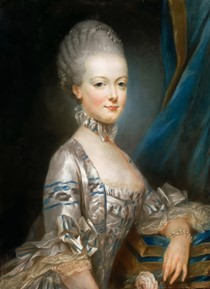 La Motte searched around for an ally and landed upon Cardinal Prince Louis de Rohan who she knew had been desperate to gain the favour of the Queen. Not leaving anything to chance, La Motte seduced the Cardinal and became his mistress, acquiring power and influence that was harder to come by outside the bed chamber. These two conspirators started to write letters, ostensibly from the Queen, making it look like Marie Antoinette was hoping to buy the necklace in secret. Rohan was so desperate for her approval that he agreed to pay the jewellers in four payments over the course of two years. He thought he was acting for the Queen but in fact she knew nothing at all about these payments.

La Motte took the necklace, broke it down, and sold off the diamonds piece by piece.

She might have got away with it, but a jeweller happened to approach the Queen’s lady in waiting to ask about a further payment. The lady in waiting took the message to the Queen, and the deceit was laid bare. De Rohan was arrested but later acquitted and LaMotte and her accomplices were found and eventually punished.

Although Marie Antoinette was a victim within this 18th century scandal, her reputation was tarnished and the scam helped her to lose the trust of the French people. The country was suffering financially and the poverty of the people did not sit well next to the excesses of the royal court. Civil War broke out soon after, and the destroyed necklace was never recreated. Most of Marie Antoinette’s famous jewellery collection was sold off as the royals were attempting to flee France in 1791, to escape their executions.

Back in the present, our favourite French anti-hero, Lupin, is trying to steal the very same necklace to avenge his falsely accused father. We can only hope that this particular heist works out a little bit better for him.