The Beginnings of ‘Atonement’

Like most novels, the journey of the creation of Atonement was not a linear one. There were many false starts and changes in direction – at one point the novel was completely ignored for eighteen months.

These are the real notebooks belonging to Ian McEwan. He wrote the early drafts of the book in these green notepads between the years of 1999 and 2001, but the concept of the novel had been born long before. 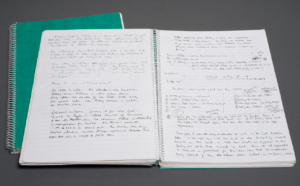 In 1997 Ian McEwan went on holiday to Costa Rica with his sons. As he sat looking out to sea, he felt inspired to write a scene featuring a young woman walking into a grand drawing room with a vase of wildflowers she had just picked. She is aware of a young man outside and although she doesn’t want to see him, she also does want to see him. At this point the scene was set after the war, and the details of the grand house and the hot day were still hazy ones. Nothing came of this draft, but years later McEwan remembered the scene and rewrote it, changing the date to pre-war and giving it the heightened emotion that readers will be familiar with today. This rewritten scene then became the second chapter of the book as published. He wrote another chapter that he knew would precede it, which was about that young woman’s younger sister, Briony.

Sometime round about 1997, I made some notes that were about the end of the century, and looking back and realising that there were errors we made – the two World Wars in particular, the Holocaust – that we could never correct; that we could try to correct but the effort would be protracted.

After the date change, the novel came easily, but McEwan was still worried that the format would be too original for the critics. His literary agent, Peter Straus, has said,

I think he was concerned that this was a mad idea: the narration, the way it was constructed, that the critics would not like it.

It seems that his fears were unfounded.

The images below are early typescripts of Atonement with revisions from 2001 and the first draft of the ending of the novel along with revisions, which is dated 7 June 2001.

Thank you to The Harry Ransom Centre at The University of Texas, Austin, for providing these historic images.